Olive oil is not only delicious, it also helps your heart, fights cancer, controls your blood sugar, lowers blood pressure, prevents bone loss, and (best of all?) stops that little pooch of belly fat from forming. 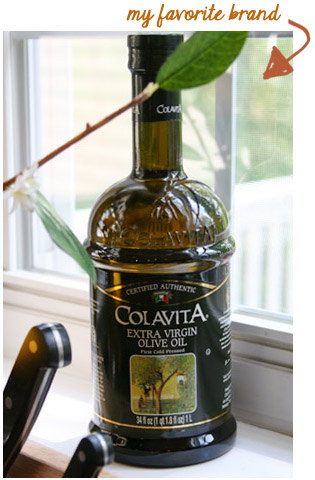 Even though the Greek poet Homer called it “liquid gold,” only half of the households in America have a bottle of olive oil in their kitchen. Why? Perhaps because Americans didn’t grow up eating it, and aren’t sure how to buy it.

Vegetable or canola oil is a no-brainer because we’ve seen it on TV since we were little. It’s the stuff you pour in a pan, or use to bake things. It’s the big, sticky yellow bottle at the back of everyone’s kitchen cabinet.

Olive oil is slightly more expensive than vegetable or canola oil, but you should only be using it a tablespoon at a time, so it will last longer than you think. Just keep the bottle out of direct sunlight; stored in a dark pantry is best.

Comparing Cooking Oils: Chemical Cocktail vs. Fruit Juice
Even though they’re not all made from vegetables, in cooking, “vegetable oil” generically refers to any oil you can eat or safely cook with that was somehow derived from a plant. So while the label might say “sunflower” or “canola” or “corn,” the recipe will just say “vegetable oil” or “cooking oil.” All of these oils are processed to the heavens, and don’t have any noticeable taste, so you can interchange them in any recipe.

Olive oil is different, though. First of all, olives are a fruit. They are pressed to squeeze out their juices, so olive oil is a fruit juice, or fruit oil, really. If you buy the right stuff, olive oil is nothing but pure juice from the olive. The lack of processing is one of the reasons olive oil is so healthy: it gets to keep all of its healthy components, like antioxidants.

The other oils, though, aren’t as lucky. Because they don’t come from a juicy fruit in the first place, getting oil out of them isn’t as easy as simple squeezing. Vegetable oils go through a bunch of processes that include adding chemicals to remove the color, the odor, and the taste. Lots of crazy chemicals. And in that process, the original plant is stripped of almost all of its nutritional goodness.

Labeling Lies
No matter what health benefits they are claiming on their packaging, no other oil is as pure or as healthy as olive oil. See an oil that’s labeled “cholesterol free”? That’s nice, but all vegetable oils are cholesterol free. See another oil labeled “light”? They must be referring to the color, because every single oil has the same 120 calories and 14 grams of fat per tablespoon, even olive oil. The big difference is olive oil is pure fruit full of nutrition and healthy fat your body needs, and vegetable oils are less healthy, chemically treated nonsense.

Olive Oil Making 101
Olive oil was originally made by squeezing olives with big rocks, and then later by pressing them between screened platforms. The olives were squeezed just one time, no heat or chemicals were used, and the oil that came out was the purest and the best. This is called the “first press.” Only oil that is removed from the first pressing can be called “extra virgin” or “virgin.” This is the only oil we want. If it’s not a virgin, keep walking. (Good lesson for life, no?)

Today many companies use fancy centrifugal machines instead of presses to get this first juicing out, but everyone still likes to advertise “first pressing” or “cold first press.” Ignore these words. We are still only looking for “virgin.”

Olive Colored
The actual color of olive oil can range from gold to green, depending on the olives. Look for something with a rich color, as a really light hue probably means other stuff was added to it.

Olive oil is usually clear, but it will cloud up when it gets cold (that’s why you shouldn’t store it in the refrigerator). If your house gets really cold and you notice your olive oil bottle is cloudy, don’t worry, it’s not a sign that it’s rotten or anything. Just leave it in a warmer place for a few hours, and it should clear back up again.

OO, VOO, EVOO, WTF?
When the very best olives in the crop are picked and pressed within 24 hours, you get the very best oil. This we call extra virgin olive oil (or if you’re a Rachael Ray fan, EVOO). Again, don’t even bother with anything else.

Ideally, the story would end here, but not all olives are perfect, and growers don’t want to waste the bumped, bruised, or not-quite-ripe ones. So companies use the less perfect olives to make a product of lesser quality: virgin olive oil. Same process (although usually not done within 24 hours of picking), same chemical-free juice of the olive, just with subpar olives. The price difference between extra virgin and virgin isn’t great enough that I would ever buy oil from possibly rotten or picked-up-off-the-ground fruit.

The pressing process leaves behind lots of olive pulp and stuff, so in an effort to make something oily out of even that, companies will add chemicals to the olive leftovers and get themselves some more oil. This we call just plain or regular olive oil. We don’t like this kind of olive oil because it’s not fresh, it doesn’t use the best olives, and it includes all kinds of chemicals, which really defeats the whole healthy purpose.
Don’t be fooled by any other labeling: pure, refined, 100 percent this or that. The most important words on the bottle are extra virgin or just virgin. If you don’t see those, move on.

Buying Olive Oil: The Skinny
In a hurry and just want the skinny? Buy EXTRA VIRGIN olive oil. Period. Got more time to look? For your best bottle: get 100 percent Italian olive oil made from 100 percent Italian olives, harvested and pressed at the same place. Look for a nice Italian company (not an American company with a fake Italian name for branding), and make sure it’s as far from the expiration date as possible. If you want to save money, for your cooking bottle, get extra virgin olive oil as freshly made as possible, with at least some of the olives from Italy.

The Million Other Confusing Label Claims
Most of the extra words that can make shopping for olive oil confusing are just marketing gimmicks. But be careful, because some of them are purposely trying to trick you into picking the wrong oil. Here’s what each of those words and phrases mean, in plain old English:

PURE • A pretty useless word that can mean anything. It’s supposed to tell you that there are only olives in the bottle, but since they don’t have to talk about the chemicals they used to get there, or what shape the olives were in when they used them, “pure” can be ignored.

REFINED • While refined sounds like it has fancy manners or something, it really means the olive oil has to be produced using chemicals, filters, and heat that could end up putting toxins in your body instead of antioxidants. Refined oil usually has a funky taste and smell, too. No good for cooking. No good for anyone.

BLENDED OLIVE OIL • We only want extra virgin olive oil, not our pre- cious oil blended with who knows what from who knows where. Blended is good for drinks, bad for olive oil.

OLIVE POMACE OIL • Pomace is the mushed-up olive skin and pits left over after pressing. Using the pomace (and lots of chemicals) to create some olive oil is like using the hair caught in your vacuum cleaner to make your own extensions. Nasty. Avoid, avoid, avoid.

LIGHT OLIVE OIL • The same guys who’ll try to sell you the Brooklyn Bridge are trying to trick hyper-dieting Americans into buying crappy oil. Since all olive oils have exactly the same amount of calories and fat per serving, there is no such thing as a “light” olive oil in terms of calories or fat. Somebody at some crappy company realized that if they took inferior olive oil (which is lighter in color because it’s so crappy) and called it “light,” refer- ring to its color, they might trick people into buying this kind of oil. You’re far too smart for this con.

F I R S T P R E S S • Completely unnecessary. If it’s extra virgin, it’s first press (and most of them aren’t even really “pressed” anymore). You can ignore this.

ULTRA, PREMIUM, OR ULTRA PREMIUM • These are just show-off words. They don’t really mean anything except that the company thinks its olive oil is great. It might be, so you don’t have to avoid these words. Just don’t let them sway your shopping decision.

TRADITIONAL • I think this label is hilarious because it’s not a regulated word; anyone can stick it on anything. I saw it on a bottle that also had “composed of refined olive oils and virgin olive oils” on it. What’s traditional about mixing junk in with the good stuff to stretch your profits? Niente!

ESTATE GROWN • What estate, where? And are the olives all from the same estate or from a bunch of different estates in skievy places? Meaningless.

UNFILTERED • You can find this on extra virgin olive oil, and basically it just means they didn’t strain out every single little piece of olive skin or pulp from the oil. Some people say this makes the tastiest oil. Some people think it makes the oil expire faster. If you don’t mind little specks floating in your oil, go for it. Me, you know I’m all about cleansiness.

HANDPICKED • This is supposed to tell you that they treat their olives with TLC, which is fine, but there are also nets and rakes and some machines that are used that do just as good a job getting the best olives off the tree. Handpicked is sweet, but it might mean you’re paying more for the oil because their labor costs are higher.

MADE IN ITALY, IMPORTED FROM ITALY, 100 PERCENT ITALIAN • These all sound good, but you have to look at the other writing on the bottle to figure out how good it really is. Ideally, you want an extra virgin olive oil that is made in Italy with only Italian olives from the same property. Most bottles I’ve seen with “made in Italy” on them go on to tell you that it was also made with olives from Spain, Greece, Turkey, and Italy. Why is this bad? First of all, I’m biased, but Italian olives are the best. And since olives are tastiest when they are handled carefully and pressed within twenty-four hours, the thought of a bunch of ragtag olives being shipped in from different countries on boats and trucks and stuff doesn’t really appeal to me.

Categories: Cooking, How To