An Awesome Book of Love

I am, perhaps, one of the meanest children’s book critics on the planet. I think most of them, even (especially?) the best-sellers are downright terrible. 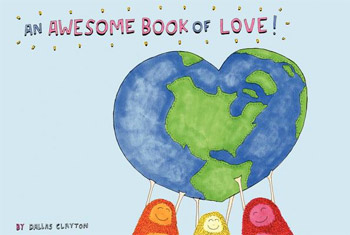 What makes me an expert? Perhaps nothing more than sheer volume. You see, every night in our house, we read our children to sleep. Every single night. Every single kid. No exceptions. Not even for vacation. Since my oldest is 15 now, that’s a good 5,000+ nights. I’ve read many, many a book out loud. And therein lies the problem. Maybe the authors didn’t read them out loud to see how the rhymes don’t work, how the sentences stick to your tongue, or how pointless the ending was.

Even though they are nice and short, children’s books are one of the hardest genres to write because they are so hard to get right. I’ve gotten so many best-selling books for my kids that turned out to be duds, I’d almost given up that there were any good books left.

And then I found “An Awesome Book of Love.”

I was in the bookstore with my 7-year-old son and the (fairly ugly) cover caught my eye. I picked it up, flipped it over, and found out it was by that guy from the Google commercial, Dallas Clayton. The one who flips his hair like a surfer and self-published “An Awesome Book.” I hate that guy.

I opened his new book, dedicated to his son–I’m not kidding–named Audio Science, I was really hoping for a self-superior laugh. Instead, I smiled. The illustrations were actually adorable. And the words were touching. And clever. The rhythm danced like Dr. Seuss.

“If I was a dinosaur,
And you were a jet,
There’s a chance,
A good chance,
That we’d never have met.”
– An Awesome Book of Love

After just a few pages, I found myself tearing up. I wanted to say these things to my children. They had to hear about my love this way.

I bought the book and read it to all three of them, teenager included. And I cried while I read it. It’s now one of our favorite books. And it taught me to not judge a book by its cover. Or a hipster by his hair. Or maybe not. But it is a darn good book!

An Awesome Book of Love by Dallas Clayton

← Which Kind of Cooking Tomatoes?
Make Your Own Vintage Milk Bottles →