How to Cook with “The Pizza Herb”

Aside from tons of vitamins and nutrients, oregano also has more concentrated antioxidants than blueberries, has antibacterial properties that will help keep your entire system healthy (even protecting you from other germs on other foods), and actually counts as a dietary fiber. 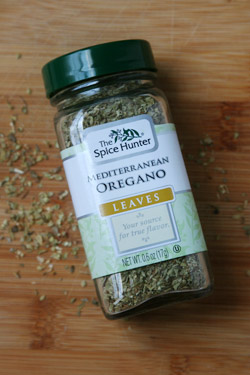 Worried about all the crazy infections that are now resistant to antibiotics, like MRSA? Me too! Well, here’s some good news for Italian-food lovers: in 2008, scientists discovered that the oil from oregano actually kills the MRSA bacteria better than eighteen other antibiotics! Just another reason why home cooking with your own herbs can help your family’s health.

Looks like:
Green stalks with small leaves, kind of like mint. It also has pretty purple flowers when it blooms. Dried oregano looks like little flakes of green and brown.

Tastes like:
Aromatic, a little bitter, and kind of warm tasting. Really good oregano eaten plain will make your tongue a bit numb.

Dry or fresh:
Unlike basil, oregano actually has stronger flavors when it’s dried, and doesn’t lose its goodness. I usually go for fresh things, but with oregano, I only used dried. It’s cheap and easy, it tastes great, it’s good for you, and you’ll use less of it in your recipes than fresh oregano, so it saves you money.

Where to get it:
Any grocery store, in the jarred spices section. It’s a classic pizza condiment, so you’ll probably see it in little round jars in nicer pizzerias.

Fun fact: Oregano became popular in America after World War Two when soldiers who had been stationed in Italy brought the “pizza herb” home with them.

How to prep it:
No need. Just scoop, pour, or shake it directly out of the jar.

How to eat it:
You can use it in recipes, or sprinkle it right into salads or dip- ping sauces or over pizza.

How to cook with it:
Only the leaves are used for cooking. Just measure out how much you need, and add it directly to the dish. It won’t dissolve like salt, but will stick to the food. Best in: Tomato sauces, on pizza, over veggies and grilled meat. It also works really well in spicy food. Oregano goes perfectly with a tomato, any way, anytime, anywhere! When you’re using tomatoes, you should automatically think “oregano.”

How to store it:
Store the jar in a dark place, like your cabinet. It will last from six months to forever. It will never go bad, but it will lose its flavor eventually.

Categories: Cooking, How To